Czech music producer, composer, sound engineer and musician.
Pavel Karlík is a founder and director of SONO Records studio. The Studio was founded in 1988 and gained the international fame and popularity.
Education: College of Electrical Engineering.The study of acoustics and studio technology, architecture and construction. 6 years of study piano, harmony, guitar.
Experience of ways to capture, mixing and mastering music gathered initially in London, later in the SONO Records studios. Member of AES- Audio Engineering Society for 20 years.Nearly 30 years in the music industry.

A large part of his career was focused on recording the czech symphonic and film music orchestras for worldwide clients and productions.
Among the most important Pavel’s clients of classical music are clients like Mrs. Angela Gheorghiu, Bryan Hymel, R.A. Rahman, Gábor Boldoczki and many others. Companies include the BBC, Principle Pictures, Dream Works Production, Funline Animation, Schulberg Productions and Czech TV.
Music where Pavel participated as sound engineer won American OSCAR Award two times./with R.A.Rahman composer and with Glen Hansard and Marketa Irglova/
Pavel also recorded a classical music for a special event in USA. It was an Orchestra recording for 10th Anniversary Commemoration held in Washington DC on Sept.11, 2011 with the composer John Califra.The most famous performers whose recordings he worked include David Bowie, Living Colour, Nazareth, Joss Stone,Glen Hansard,Kriss Kristofferson, R.A.Rahman, Linkin Park, Mike Stern, The Levellers, Julian Lennon, Suzan Vega, Philip Glass, Lou Reed and others.
Pavel Karlík is also known as a longtime producer and engineer of other successfull groups of folk, jazz and rock with more than hundred albums on his account. As a sound engineer , producer and mastering engineer Pavel worked with Lucie, Wanastowi vjecy, Kabát, Divokej Bill, Pražský výběr, Vl.Mišík a ETC, Mig 21, Marta Kubišová, Lenka Dusilová, Marta Topferová, Ivan Hlas, Ondřej Pivec, David Dorůžka, Jaromír Honzák and many many others.
The last 25 years the recordings from the SONO studio received many Czech and International Awards for sound and production.
During last 15 years, Pavel is very intensively devoted to mastering work of recordings and became a sought mastering engineer.
As an additional activity closely related, Pavel Karlik designed 14 control rooms and studio rooms and with his father he built the famous pure tube preamplifier KARLÍK TP-1 . This preamp is used by Abbey Road studios, Cold Play, R.A.Rahmnan,Phill Brown, Doug Wimbish, John Califra and many others.

was born in 1966 in České Budějovice.
From the age of seventeen, he has been actively interested in music and has been doing his full bass play.

In less than twenty years, he moved to Prague to look for musicians he could play with.
Before the revolution in 1989, he met Pavel Karlík and played together in the Titicaca group. Following the revolution, he co-founded with Pavel Karlík the SONO studio, where he is still active.
He collaborates with domestic groups Kabát, Kryštof, Lenny and many others, and he plays a major role in recording jazz recordings for Animal Music publisher and world music publisher Glitterbeat.
He collaborated on recordings with David Bowie, Living Colour, Nazareth, Levellers, Napalm Death and others.
In the field of sound, he has experience with recording, mixing and mastering music of all genres, often participating in recordings as a music producer.
As a musician he hosted with Pražský Výběr, Čechomor, Krusipusk and the Norwegian band Bersek Bastards.

is a singer, musician and sound engineer. He has been working for SONO studio for over ten years and has recorded many recordings for many Czech and foreign musicians and artists.

In addition to working in the studio SONO, he is also actively performing on concerts. Currently, Paja is a member of the Anna K’s band, guest with Vladimír Mišík and his Etc. band and appears at the concerts of the band “Sto Zvířat”. He also works on his own music and often hosts as a session musician and vocalist in the studio.

is working as a sound engineer in the SONO studio for more than ten years and has recorded many recordings of Czech and foreign musicians and artists, for example: Marta Topferová, The Tap Tap, Clarinet Factory, Ida Kelarová, Katapult and Chinaski. 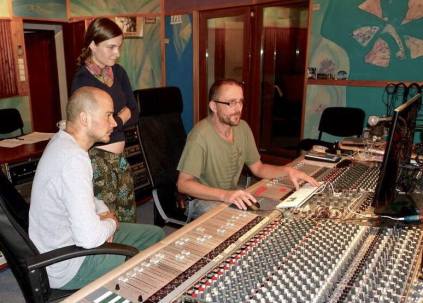 In addition to his work in SONO studio, he is dedicated to theatrical music and sound design. He received the Best Music Award at the Puppet International Festival in Zagreb in 2007. He graduated from the Dramatherapy and Music Therapy course and cooperates with the Studeo Educational Center as a lecturer of sound production for people with disabilities.

was born in Prague in 1978 in a musical family.
From five to eighteen she sang in the choirs.

She studied at the French Lyceum Štěpánská in Prague and after at the Faculty of Humanities at Charles University in Prague.  Since 2001 she is working as a booking manager at SONO Studio. She organizes the running of the company, recording, booking, musicians and arrangers etc.
As part of the recording studio, Karolina participates in cultural projects
supporting children and adults with disabilities.